I am returning to the more technical problems surrounding the Minoan scripts. What I intend to do at this occasion is, to show you how the signs of the Minoan writing systems can be traced from its origins until the very end of Linear Minoan scripts. Finding the Hieroglyphic counterpart of a Linear A sign is not the simplest business. Anyone who ever tried to read a Minoan Hieroglyphic inscription can testify this. I will try out a new method today: one employing the symmetry-based classification of signs. We shall see it later, that this reductionalist approach is in fact quite useful. The case of two Linear A and B signs: KA (Lin AB *77) and QE (Lin AB *78) will nicely illustrate the way Linear A signs can be traced back to Hieroglyphics - and also the problems associated with this approach.

The Linear AB sign KA has long been noted for its similarity to a wheel in its shape (for example, see the Anatolian hieroglyph Ana *292 for 'wheel' - with the phonetic value hari). Its Minoan value also seemed similar to the Luwian word 'to rotate' (kalutiya). Yet there was a major problem with this approach: despite the considerably high frequency of KA signs seen in Linear A documents (among the five most common phonetic signs on the Haghia Triada tablets), no one was ever able to discern even a single wheel-like Hieroglyphic figure. So this is where the original theory fails: whatever object the Minoan KA sign depicts, is definitely not a wheel.

How can we solve this problem? If - disregarding the actual object - we only sought for signs that have a similar symmetry (i.e. at least two mirror axes), we may get six signs as a result. These are shown on the table below. Apart from a fair collection of "rectangular" signs (*39, *63, *65, *66), that could never have evolved into the circular QE or KA syllabograms, we get two good hits: One of them is a simple circle (Hie *73) - either open or filled. This one is fairly rare (CHIC230, MA113, MA119, MA120, KN69), but likely a phonetic sign. Since it co-occurs with the 'sieve' sign Hie *47 on MA113, it is clearly not a mere variant of the latter (more about it later). The next one is the very common 'cross pommée' (Hie *70) sign. Although the 'cross' sign is closer to the Linear A KA sign than any other of the above ones, we have to keep in mind, that KA and QE are not the only Linear A signs of this high symmetry. In fact, there are no less than nine phonetic signs in Linear A and B, that can have more than one symmetry axes. Some of them even have rotational symmetries. The syllabogram RO (Lin AB *02) also admits multiple mirror axes, and matches the 'cross' sign in shape almost perfectly. Unlike all the other signs of the o-series, RO is also reasonably common in Linear A (within the top five on the Haghia Triada tablets). So it is certainly not a bad match for the Hiero 'cross pommée' (Hie *70). 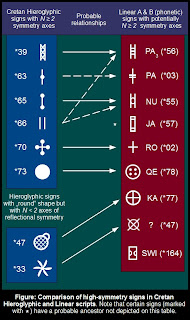 Once we made the identification above, the values of the remaining signs are constrained. The problem of assignments is this: there is only one valid solution. If you made an error early on, it is often only realized in the end: namely, you will have signs that you were unable to assign at all. For this very purpose, I do not attempt the full asignment of Linear A signs to Hiero ones. All I try to do is find the best matches first, thereby minimalizing the chance of an early mismatch, and the collapse of the entire attempt.

Since we had nine signs identified in Linear A or B with multiple symmetry axes (RO, PA, *47, NU, PA3, JA, KA, QE, SWI), and we found only six appropriate matches among Hieroglyphics, we clearly need some intuition. We know from the evolution of several writing systems that signs frequently increase their symmetry class (i.e. they become more symmetric) as time passes. This stems from the all-permeating human tendency of regularizing things around us. The reverse can also happen: this is how the round Linear A KA sign "opened up" in Cypro-Minoan and became the arrow-like Cypriot KA sign. Given these tendencies, any sign that had only a single axis of symmetry, could have easily evolved into one with multiple axes. In the context of Hieroglyphics, there is a sign that could actually well match both KA and QE if we allowed a graphic reduction: this is the already-mentioned 'sieve' (Hie *47) sign.

Is the 'sieve' sign (Hie *47) KA or rather QE? Alone from its shape, it is impossible to decide. However, we do have a powerful help on our hand: the pictogram-like syllabary of the Phaistos Disc. Although different from the traditional Hieroglyphics, the disc does present us one clearly discernible 'cake'-like sign (Pha *12). While matching with Lin A QE almost perfectly in shape, it is clearly not a sieve. On the other hand, the disc also has another sign (Pha *17), that looks like a Rugby-ball with handles. That is exactly how a (handled) sieve would look if we viewed it from aside. From this point on, the identifications KA = 'sieve' and QE = 'cake' are rather straightforward. As I mentioned early in this post, there is also a somewhat cake-like 'full circle' sign in Minoan Hieroglyphics (Hie *73). It is much rarer than the 'sieve' sign, but the QE sign is also much rarer in Linear A, than the KA one (30 vs. 117 occurrances on the HT tablets). This last note essentially closes the circle. Or at least so I hope.

For those who still disbelieve these identifications, I suggest to read (or rather, parse through) the Linear A tablet HT6. It is the only case where sign QE is used as a logogram: and from the context of the tablet, it must refer to some foodstuff. Given that it stands alongside the term PI-TA (pita = Aramaic for 'bread'), I strongly feel that the 'cake'-sign actually meant 'bread'. It should not be forgotten that there exists a sign (Ana *181) within Anatolian Hieroglyphics that looks similar to the Linear A QE sign and the same as Phaistos Disc sign *12. It is actually the Luwian logogram for 'bread'! 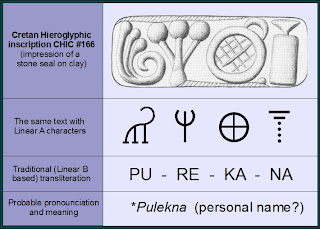 If we add our newly-gained insight to our previous knowledge, we are now able to read further Hieroglyphic documents. The Hieroglyphic seal (CHIC No. 166) I show above, will be our next objective. The reading of the signs is very likely PU-RE-KA-NA, and this seems to be a Minoan proper name (probably *Pulekna).

Thoughts, notes, additions? If you can offer an alternative assignment of the cited signs, feel free to share it, I would love to see it, to either confirm or contest the one I showed you here!

Update: The theory presented here is slightly outdated, since now several instances show that Hie *77 reads as KA more plausibly than Hie *47.   Hie *73 is prossibly not a syllabogram at all, but a numeral (100). This does not mean that Hie *47 cannot be read meaningfully as QE. PU-RE-QE-NA also appears to be a plausible reading for this name (toponym? ?=Polychna?). Also, Pha *12 might read as KA (yielding the particle I-KA- in word-initial positions).
Posted by Andras Zeke date: 2:00 PM

Email ThisBlogThis!Share to TwitterShare to FacebookShare to Pinterest
Labels: Linear A, Minoan Hieroglyphics