How to read the Minoan Hieroglyphics ?

Having discussed many things about the fairly-well readable Linear A inscriptions, I now feel confident enough to continue our dig into the past. And that means it is time to start discussing a script even more ancient than Linear A. It is time for some Minoan Hieroglyphics.

To anyone not comfortable enough with this topic, one glance at the famous Phaistos disc is enough to be convinced that writing systems other than Linear A did exist on Crete during the Minoan era. But it this point it gets interesting: according to a thorough archaelogical analysis, Minoan Hieroglyphs were not only used before the arise of the more simple Linear A script. They were also used more-or-less contemporaneously.

This fact points to a functional segregation between the two scripts: While the more figurative (and thus aesthetically more pleasing) Hieroglyhic script was heavily used on sigils and at other 'representative' occasions, the more simplistic Linear A script was used primarily for account-keeping. Despite the fact that it is much simpler to write with the Linear system, so high was the charm of Hieroglyphics, that craftsmen and artists continued to use them for a long period. And they even invented novel versions of the old theme. That is how the signs of the famous Phaistos Disc were born. These are not the same as the ancient Hieroglyphics, but nevertheless appear to be genuinely Minoan: It is not beyond reason that these signs represent a "secondary" Hieroglyphic system (that is, re-interpretation of the already simplified Linear A signs as figurative elements, to create a highly decorative "festive" script).

Looking at a Hieroglyphic script, the first thing that comes to one's mind (apart from admiration of the craftsman's work): How can we read it ? Where does the script start? The problem is, the scripts go from right to left, from left to right, from up to down and even around in circles. There was no fixed direction of writing. This is no good news at all.

While some documents indeed offer no clue, there are many more that contain dedicated elements to help the reader. There are at least three different signs to help to guess the direction of reading. The most salient feature of these scripts is the small X most texts contain on at least one end. This is actually the "start" sign - it has no phonetic value, other than indicating the start of a word. The "start" sign can even be encountered on some Linear A documents (such as table HT123-124) - this is proof enough that the two systems were used beside each other, by the same people.

An other frequently encountered feature is a Z-like (lightening or wave-like) sign. If one more thoroughly analyses the scripts, it turns out that this sign (Hie *61) always stand on the end opposing that of X. This observation and the fact that Hie *61 is unlike any meaningful Linear A sign (except Lin AB *76 = RA2, but that does not fit well into the context) implies that this sign is another marker. John Younger interpreted Hie *61 as the "termination sign", but I believe an interpretation like "abbrevietion sign" might equally be correct: it sometimes stands where only a single sign follows the start sign (i.e. on KN He HM 1279 and 1281). The usage of this sign is by far not that common compared to the almost-universal X ("start") sign: for example, it occurs regularly in accounting texts (where abbreviations are common in Linear A as well), but only rarely on seals.

And if these two signs were not enough, some documents (especially seals) feature a further mark to aid the readers: these are the tiny dots that follow each single sign on many seals and other inscriptions. One simple look is enough to see that they always stand behind the signs, not before them. So - with their help - a careful eye can follow the flow of characters even when they go around in circles.

Now to end the hollow theorising, let us make some reading excercises, with the help of the Hieroglyphic Seals Database (thanks to the University of Florence). Our first piece to practice on shall be the nice round seal CHIC #126. You can see its impression below: 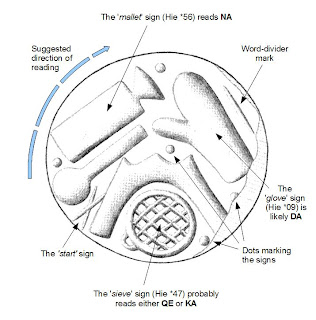 As we are already trained in reading such scripts, we should immediately realize the presence of the small X in the lower left corner. So the reading should be started there. Theoretically, we should have two different directions to start, but if we take a more careful look at the small dots, it is apparent that the script can only go clockwise (as the 'gate' sign is in the middle of the text). So we read X-*62-*56. But there the line takes an abrupt break. The vertical line before the glove-like sign *09 is actually a word-divider (Hiero style), and thus the reading should be continued from there: *09-*36-*47. This is exactly what the direction of the little dots suggest (the dot of *36 was displaced to the right probably because it did not fit into the remaining surface). The only possible alternative order, *47-*36-*09 is less likely.

Okey, now we have our order. But what about the phonetic value of the signs? Since it is pretty much likely that Hieroglyphics are ancestral to the Linear A script, we expect this script to be a syllabary as well. This is further confirmed by the number of signs: there are less than a hundred of them (even less than the Linear A signs). So, by careful examination of the shape of signs, we may have the luck to find the phonetic value of some, and even read some complete words! 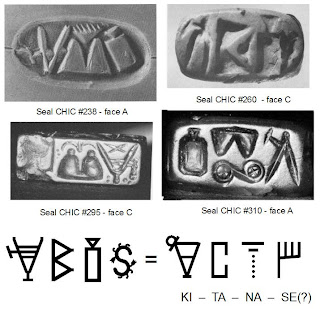 On the above specimens, we can identify four characters - most of whom bear at least some resemblance to the Linear A signs. Though we see no 'start' sign except on the third seal, we can infer that the text is to be read from left to right on the upper seals (right to left on the lower ones) and counterclockwise. This will be further confirmed by the reading (see below).

In the left side of the first seal, we see a 'sistrum' sign that has to be read as KI. Though the musical instrument it depicts has a different orientation of chords from that of the classic harp, it is interesting to speculate that it stands for the word Kithara. The next sign we see is a double-backed object (possibly breasts or hills), that undoubtedly reads as TA. The third sign is the hardest to decipher, but after some search one can find that the only fitting value is NA. (This latter identification is non-trivial and this is something I would love to make a post of some time later). So the reading is KI-TA-NA-?. The text ends here on the second and third seals. The last additional sign of the first and fourth seals is probably the same, but not easy to assign: possible values include SE or TE (both would fit to the above word well).

How can we check if our decipherment was correct? On the KH 30 and PE Zb 3 tablets we can enconter a very closely related sequence: KI-TA-NA-SI-JA-SE. This cannot be a mere coincidence!

The only thing that remains unknown is its meaning. Theoretically, the words written on sigils can be either names or titles. Since we can find at least four different examples of seals with the sequence above, this is unlikely to be a personal name. It is much more likely that this was some (unknown) title. Similar repetitive words dominate most seals, often leaving no more than only one facet to be unique, thus representing a proper personal name. 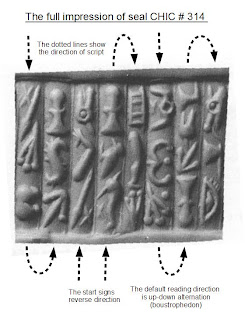 For the last part, just for some teasing, I show an impression of a (multi-faceted) seal. Though some sides contain 'start' signs, some do not. Where do we know how to read them, then? The answer is simple for those who have read too much ancient texts: the direction of reading is a boustrophedon ! One has to read in the order up-down-up-down-up-down. The direction only changes where we see a 'start' sign, and these are the only facets where a start sign was featured. Otherwise just follow the turns!
Posted by Andras Zeke date: 1:52 PM