Before going astray and heading straight into Cypro-Minoan matters, I would like to discuss a small but important topic. This post will be about the evolution of the Aegean writing systems: Here, we will attempt to reconstruct their intimate historic connections as accurately as possible based on a rather fragmentary set of evidence available today.

Writing appeared rather suddenly on Crete, at the beginning of the so-called "Middle Minoan period" at the turn of the 2nd millenium BC. It coincided with profound changes in society and culture as well as the accelerated urbanization of the island. These changes are best exemplified by the architectural innovations (such as the ashlar masonry) leading to the construction of the so-called "Old palaces". There can be little doubt that the sudden surge in Minoan technology, arts and culture was triggered by the establishment of regular trade contacts with the advanced Middle Eastern civilizations. With Egypt being the single most influential empire of the region, it is no wonder that the earliest Minoan writing was clearly modelled after the Middle Kingdom Egyptian hieroglyphs.

Although superficially indeed similar to Egyptian symbols, Cretan Hieroglyphs are clearly distinct in both form and phonetic value. Yet the biggest difference lies in the underlying system itself. Egyptian Hieroglyphs are part of a complex writing system, where most signs have more than one possible reading, dependent on context (similarly to the Japanese Kanji characters). Signs could have both a phonetic (single consonant or syllable) value or an ideogrammatic (word) reading, but could even be utilized as phonetic complements or logograms, "reinforcing" the reading of words they were attached to. As many of these duplicities could only be interpreted by a native speaker of Old Egyptian, this system was very difficult to utilize for speakers of foreign languages. Also, the Egyptian system had over 800 different signs, which is an extremely large inventory of symbols compared to Cretan Hieroglyphs (roughly 85 or so different signs are known). Minoan scribes apparently took only the concept of writing from Egypt, creating their own signs and simplifying the system so that it became almost fully phonetic. Such a low number of individual characters is uncharacteristic of the complex writing systems of the ancient Near East, but it is fully compatible with a simple syllabary (reminiscent of the modern Japanese Hiragana or Katakana writing). Thus we can safely assume that Cretan Hieroglyphs, similarly to all later Aegean writing systems, were already syllabic in nature. 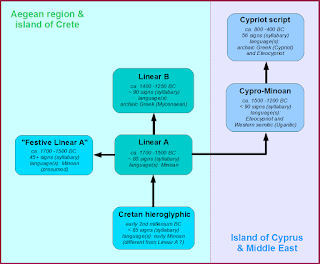 
Hieroglyphic Cretan script is mostly preserved on sealstones, but was also used on short clay tablets, bars and labels for the explicit purpose of administration. Other uses were rare; the longest contiguous Hieroglyphic text is found on the altarstone of Malia (in a religious context). As seals might have been used by several generations, it is difficult to judge when the use of the Hieroglyphic script came to an end. One thing is clear: After the rebuilding of the palatial complexes on Crete (with the advent of the so-called "New Palace Period") the Hieroglyphic script fell out of regular use. A new script has taken its place, called Linear A. The relationship of Linear A and Hieroglyphics is probably comparable to the relation between Egyptian Hieroglyphic and Hieratic/Demotic script. All currently available evidence suggests that the underlying system remained essentially the same; it is the shape of signs that suffered profound change due to graphical simplification.

Linear A was used much more extensively than Hieroglyphs. Hundreds of clay tablets, inscribed vessels, statues, altarstones and even jewelery testifies its daily use. The triumph of Linear A is also striking in a geographical sense: Wherever Cretan traders went, Linear A followed. Perhaps due to the simplicity of the syllabary, it quickly spread to other regions surrounding Crete. While regularly used on many Aegean islands, sporadic finds suggest that it also reached the Greek mainland as well as the island of Cyprus and the Syrian coast. In the Aegean region, Linear A eventually evolved into the much better known Linear B. Apart from a few newly introduced signs, the difference between the two linear scripts is merely stylistic; anyone skilled in reading the Linear B inscriptions can still read Linear A with relative ease. Their key difference lies not in the form, but in the language these scripts record: While Linear A inscriptions are evidence of a now-extinct bronze age language of Minoan Crete and the Aegean islands, most Linear B phrases are clearly Greek, an archaic dialect now termed as "Mycenaean Greek". Linear B was used at every important Mycenaean polity on the Greek mainland, yet the largest cache of clay tablets have been uncovered at Knossos, at the final destruction layer of the palatial complex (contrary to Evans, they more likely date to around 1200 BC, contemporary with the Pylos tablets). This is also the latest evidence of the use of Linear B: Knowledge of writing was apparently lost with the collapse of the Mycenaean civilization and the immigration of Doric tribes into southern Greece and the Aegean islands. 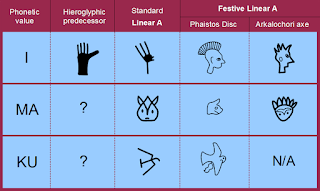 
Some enigmatic findings have also been uncovered on Crete that do not fit into the above, simple model of evolution. This mainly concerns two famous artifacts with inscriptions, the Phaistos disk and the Arkalochori axe. Although their signs are perfectly picture-like, thus reminiscent of Cretan Hieroglyphs, these are NOT written in Hieroglyphic. In fact, they constitute a poorly-recorded variant of Linear A, that I will here term as "Festive Linear A". It is very clear from several signs these inscriptions feature (namely, the "hairy head", the "cat head", the "flying eagle" and the "dotted column" signs) that they cannot be Hieroglyphic. There are no signs that would depict a flying bird in Cretan Hieroglyphic, but there is a clear Linear A sign (with phonetic value KU) with this exact shape. While a cat or a cat head is occasionally seen as a decorative element on sealstones, it is never used as a phonetic sign in any Hieroglyphic inscription; At the same time, the Linear A sign representing the syllable MA very closely resembles a cat's head.

Although it is difficult to read the earliest Cretan inscriptions, it is more-or-less clear that the linear A sign with the phonetic value I evolved from a Hieroglyphic sign depicting a hand with fingers. In Linear A, this sign is not just hand-like, it also resembles a hairy head. On both the Phaistos disc and the Arkalochori axe, the "hairy head" character very likely represents a vowel, and could essentially be identical to the Linear A "I" sign.  Judged by these examples, it seems that Festive Linear A was a throwback to the more picture-like representations seen in Hieroglyphics. Yet by the time these inscriptions were written, Cretan Hieroglyphs were probably already extinct. The mnemonics the scribes used to learn Linear A symbols could have been changed over the centuries, and many of the Linear A characters clearly lost their original shape (see my example of the evolution of the "NA" sign). Therefore their "reversal" to a detailed graphical image sometimes created anachronistic depictions, and these can be quite confusing to even experts of Aegean writing systems. A good example from present time could be the mnemonics used by Japanese students to learn certain characters. The Hiragana sign ね representing the syllable "NE" may be compared to a cat figure (and by pure chance, it does even abbreviate the Japanese word for "cat" [neko]). Yet we know that this sign probably originated from a Chinese predecessor 禰 with honorific meanings "god" or "ancestor" (and obviously not depicting a cat, but rather a sanctuary or shrine). 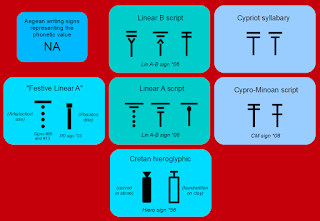 
While Linear A never managed to gain popularity in any region of the ancient Near East, it has been adopted on Cyprus from early on. Since the languages spoken on Cyprus differed from that of Crete, the script also underwent changes; giving rise to the so-called Cypro-Minoan syllabary (its earliest evidence stems from around 1500 BC.). It might be somewhat surprising that Cypro-Minoan actually consists of less signs than Linear A. Voiced and voiceless stop consonants were no longer distinguished (as a result many D- T- P-series signs and the entire Q-series fell out of use), but an entirely new series of signs was also introduced for syllables beginning with R-. While the main language recorded by Cypro-Minoan inscriptions is still poorly known, a few clay tablets found at Ugarit contain words of undoubtedly Western Semitic origin. This enables us to read a handful of (but not all) Cypro-Minoan signs with some certainty. Unlike Linear B, the latter writing system survived the bronze age collapse, and eventually evolved into the classical Cypriot script. The Cypriot syllabary represents the latest stage in the millenia-long evolution of Aegean writing. Its signs lost all image-like appearance, becoming abstract lines and curves reminiscent of classical Greek letters. Nevertheless, the Cypriot script is still a syllabary, thus very different from the true Greek alphabet (that evolved from the family of Semitic writing systems). Most Cypriot inscriptions are clearly Greek, yet there are still a number of documents that were written in an extinct, local minority language called Eteocypriot. With all likelihood, it is related to the language of Cypro-Minoan inscriptions, becoming extinct only in the classical era. But that is a story for another time...
Posted by Andras Zeke date: 3:00 PM