For my next post, we are going to discuss yet another popular topic: the forms and possible meaning of word A-SA-SA-RA-ME. It is also time for me to get my hand dirty, since I have never seen so many ill-fitting translations of Minoan phrases that was given for this poor little word. Now is the time to try and find better explanation(s).

Up to date most (all?) theories aspire to read (J)A-SA-SA-RA-ME as some sort of divine name. Apart from some (phonologically and semantically) really implausible explanations, there are two main problems with this theory. First of all, the term (J)A-SA-SA-RA-ME is very common: found on almost all objects of ritual context: on libation tables, on sacrificial vessels, on a statue and even on a silver pin, a total of at least 16 times. A little bit too common, if you ask me. Given the highly polytheistic nature of almost all bronze-age religions (as also evidenced by both Linear A and B tablets), this is not what we would expect if it were a theonym. The only religious term in Linear B that could match this high frequency would be PO-TI-NI-JA. This is, however, not a proper name, but a title ('lady', 'mistress') appended to the names of most if not all the goddesses invoked. 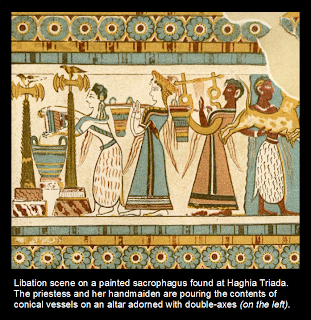 The other problem is the baffling word-formation observed on the stone vessel KNZa10, where a derived case: JA-SA-SA-RA-MA-NA can be read. The *-na ending seen here is suspiciously similar to the one seen on words expressing ethnic origin (Phraisona = 'from Praisos' in Eteocretan or PA3-NI-NA = 'from PA3-NI' in Linear A) and on innumerable Pre-Greek place-names (mostly hellenized to *-nos). This could be explained as a 'pertinentive adjective', also found (in the same form) in other Aegean languages, such as Etruscan. Such a derived form is not what we would expect if (J)A-SA-SA-RA-ME were a proper name. After all, the Greek priests would have given offerings to Zeus (or perhaps even of Zeus), but probably not Zeusian offerings. But it does not exclude a reading as a more generic term (even as an epithet). I am yet to see examples of a language that prefers to cite the very names of divinites in an adjectival form when speaking about sacrifices. If you have any good examples, I would appreciate if you could share them with me.

To this end, I looked up the word isḫassaras in the Etymological Dictionary of the Hittite Inherited Lexicon (here is a link for the online pdf version). This is the so-far best match in any other language, based on its form and meaning - if we stick with the original 'theonymy' theory. Isḫassara- is a compound stem, made up from isḫa- = 'lord' and the feminizing suffix -sara-, thus meaning 'lady'. None of its parts have a particularly good Indo-European etymology. But to derive A-SA-SA-RA-ME from this word, we have to conjecture a formative (*-ma). Does isḫassara- admit further derivations in Hittite? Much to my surprise, it does: we even have an adjective isḫassarwant- = 'lordly'. This could also potentially make our first theory work: after all, the sacrifices offered on the stone altars could have been 'lordly', 'noble' or 'divine' in a sense of either the donor (official), the circumstance (feast) or the recipient (divinity). To get this, we have to conjecture a chain of derivative suffixes on the stem of JA-SA-SA-RA-MA-NA (*-m(a)-na), not mentioning the pronominal prefix element *i- my readers are likely already familiar with. 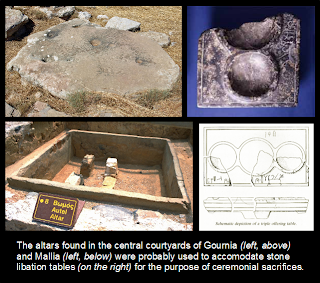 The fact that a Minoan word can admit multiple formatives in a long chain is not an isolated phenomenon. Let us consider the word-formation in I-PI-NA-MI-NA-TE, a word seen on the sacrificial stone-vessel APZa2. This single word is enough to illustrate
the polysynthetic tendency of the Minoan language. The base stem appears to be *ip(i). Let's say (as a simple assumption - based on earlier considerations) that *ip meant 'blood'. Then *ipna would mean 'bloody' (adjective in *-na), *ipnama would be 'bloodletting' (*-ma ending: expressing action?), thus *ipnaməna 'bloodletting cup' (the same *-na formative again). and finally *ipnamənate(n) = 'from (this) bloodletting cup': a regular elative (suffix *-(a)te(n)). I wrote *-te(n) instead of just *-te, to connect this ending with the Classic Greek elative case in -θεν and the Hurrian ablative ending *-tan, as they could be related forms (due to a linguistic areal effect). Also, to explain the *-i- (*-ə-?) vowel, we have to keep in mind that many of the Minoan suffixes appear to intrude into the stem they fit on, deleting or re-colouring (i.e. *a→*i) any stem-vowels they collide with.

It is also possible that the -i- (*-ə-?) vowel was only inserted into the word I-PI-NA-MI-NA to make the *-mn- cluster easily pronounceable. In a number of cases, a (helper?) -i- vowel is seen, that has been deleted in others: the most famous example could be KU-NI-SU (= Knossos?): here, the methathesis is already seen in the Linear B version: KO-NO-SO (due to the spelling rules, this cannot be any other form, just Knossos). That is only possible if KU-NI-SU was also pronounced as *Kunəsu and even as *Kunsu in real life.

Before discarding this (highly hypothetic) derivation, one should also look at some Hittite grammar-books for parallels: the Anatolian stem esḫar- (= 'blood') is derivatized in a comparable way : although the formatives themselves are different, the result is fairly similar. Thus isḫarnumae- actually means 'to make bloody'. In Luwian, the related word: asḫarnummai- may translate similarly: 'be covered in blood'. 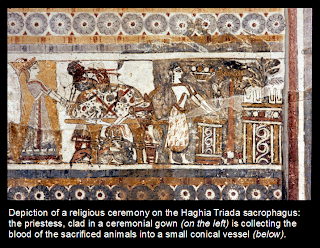 And thus we have arrived to the point to discuss a second theory about the meaning of A-SA-SA-RA-ME. It will be more in-line with the contemporary Minoan customs, but probably less pleasing to a faint-hearted reader. This possible explanation would be to compare A-SA-SA-RA-ME with the hieroglyphic Luwian word asḫarmis (plural: a-sa-ḫa+ra-mi-sa) = 'offering', 'sacrifice' (or similar). Hittitologists tend to connect this word with Luwian asḫar- = 'blood', thus *asḫar-m-is- originally meaning 'bloody sacrifice'. Whatever its orginal etymology was, it was used in a bit more generic sense in the Karkamiš inscriptions, since at least one of its mentions (see the figure) also involves sacrifice of bread, not just animals. Given the number of phrases in Minoan with possible Anatolian cognates, we should not be surprised to see yet another one added to the list. While the gemination of SA syllables is definitely problematic in Minoan (we must assume a development *-asḫa- → *-asaḫa- → *-asasa- upon borrowing - as Minoan might not have had the consonant ḫ) and its stem-ending is different, a generic meaning 'sacrifice' would fit exceptionally well with *A-SA-SA-RA-M-. Should this identification be true, A-SA-SA-RA-ME could mean 'of sacrifice' and conversely A-SA-SA-RA-MA-NA 'sacrificial'. This could easily explain the universal use of these terms in religious contexts.

The fact that Minoans practiced animal sacrifices regularly, is well-evidenced by archeological finds in and around many sanctuaries. The public altar found in the courtyard of Gournia could have served a smilar purpose as Ian Swindale has suggested (and it might be true to the site of Mallia as well). The spectacular Haghia Triada sacrophagus also depicts such a scene on one of its sides (see figure): Here, the priestess - dressed in a ceremonial robe and a crown with feathers - collects the blood of the sacrificed cow into a conical vessel, quite similar to the inscribed stone cup APZa2. The blood is presumed as having been poured onto the altar-stone by the same three figures, as shown on the opposite side of the sacrophagus. The slaughter of animals was just a small part of religious feasts. The meat was likely roasted or cooked and was offered as a communal meal for all participants (gathered outside the temple - one thing the large squares in the Minoan city-centres were exceptionally good for). Ceremonies of this sort were commonplace in Classic Greece, where they lasted for multiple days, and encompassed processions, sacred chants and drama sessions (in theatre), sports competitions, etc. These festivities also appear to be very similar in core to the (pagan) Old English Blót. 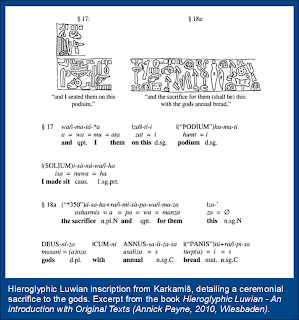 There is also a "dark side" of Minoan customs we should not ommit the mention of. The deep discordance of Middle Minoan arcaeological finds (when animal sacrifice was common), and the Linear B archives of Knossos, that clearly avoids any mentions of bloody sacrifices, cries out for an answer. Because regular animal sacrifice was mentioned at Pylos, this must have been a specifically Cretan trend. One cannot dismiss the deduction that the avoidance of bloody rites was a kind of "rebound", in response to the morally repugnant practice of human sacrifice on Crete, rarely, but definitely seen in both Middle and Late Minoan archaelogical contexts. As in Pylos, this kind of action was likely a "last resort": only executed in times of great calamities. If there is any historical basis of Greek myths, in particular the legend of the Minotaur, we may assume that it were the early Greeks who put an end to the Minoans' unsavoury willingness to sacrifice young boys and girls to their gods if their outlooks on war were grim. But as it was just a far-flung extension of the annual, usual religious ceremonies involving animal slaughter and feasting, the Greek rulers might have opted to suppress these customs altogether. Though they probably did not die out, as the sacrificial scenes on the Haghia Triada sacrophagus suggest - this marvellous piece of Cretan art was clearly made under the late Mycaenean era (ca. 1370-1320 BC).
Posted by Andras Zeke date: 2:00 PM