How many Linear A signs do we have?

My next post will be a bit of "return to basics". I have been dodging this matter for long enough, but now we really need to put some systematics into our work. What I attempt right now is to establish a 'minimal set' of Linear A signs, in the hope that this will shed light on previously undetected features of the underlying language. Of course, the only thing we are interested in, are the phonetic signs. There are zounds of logograms in both Linear A and B (and in Hieroglyphics, too), but I leave their analysis to the economists: for it is the language that interests us, not the goods Cretans produced or paid for. And this is when we need to work out a good way how to separate the two. This what my current post is about.

The base set of the Linear A system encompasses about 55 signs. These signs are all well-attested in Linear A, in phonetic use, and have a more-or-less ascertained reading thanks to their Linear B counterparts. You can see them all on the table below: 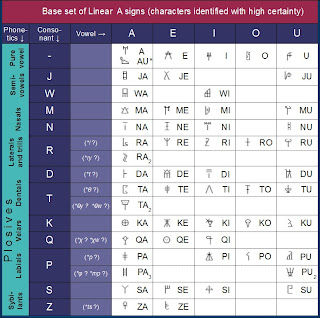 Unfortunately, not all signs attested in Linear A have such clear readings. We also have a couple of signs in the next group I shall term the extended set. The criteria for a sign to fall into this set are simple: (1) It cannot be a hapax (occurring once in the entire Linear A corpus) and (2) it should be featured at least two times in a certainly non-logogrammatic situation (the same word two times does count). I also included signs that (1) occur only once as phonetic characters, but (2) have clear Linear B counterparts with well-established reading. Using these relatively stringent criteria I could count about 27 additional phonetic signs. Most of them have very dubious readings - see them on the table below (warning: the list is very long - and it took quite some time to comply):

(I would like to express my thanks to John Younger, as his site provided invaluable references as well as corrected transcriptions of most phrases, and visual images of all the rare signs)

Even so, we are not finished yet. When searching for the signs of the 'extended set', I disqualified a number of signs that did not satisfy the appropriate criteria. Some Linear A signs are clear precursors of well-known Linear B ones, yet they are only and exclusively used as logograms. A good example is Linear A *122, the 'olives' (OLIV) logogram, that is exactly the same as Linear B *33 = RA3, with a phonetic value of rai or lai. Another example is the case of the Linear B *20 = ZO sign, that has a clear Linear A ancestor in Lin A *304. The only problem is - and that is a major problem - that Lin A *304 is exclusively a logogram, and never used as a phonetic sign. The Linear B *87 = TWE sign is attested too, but only as a mere logogram. In these cases, one can suspect that either these syllables were extremely rare in the Minoan language, or were perhaps already covered by existing signs; or even that the phonetic reading of these signs changed over time.

Other signs look like phonetic ones, but they are only attested once. This goes for examples like Lin A *342 (only in PA-*341-I), Lin A *349 (A-TO-*349-TO-I) and Lin A *361 (A-KU-TU-*361). Unfortunately, we have very little chance to ascertain their phonetic use, to exclude the possibility of graphic variants and - of course - to find the true phonetic value. Because all these troubles, I did not even attempt to make a list of this group. A clear-cut list might be impossible to comply, because of the nasty tendency of certain scribes (especially those at Phaistos) to heavily deviate from well-established sign-shapes, or to use logograms for phonetic purposes as 'shorthand notes' or even 'puns' (when used in names).

Clearly, we should not forget about the fact that no matter how many tablets we have found so far, there is no guarantee that these feature all the possible signs. Yet there is some correlation between the completeness of our syllabaries and the size of corpus. An exact calculation of sign-set size was first proposed by Alan Mackay, back in 1965, when he attempted to estimate the size of sign-set behind the Phaistos Disc. His formula was quite simple: The total number of signs, T = L*(1 - L/(L-A)), where A = the number of attested signs, and L is the total length of the sample. While this formula works well with alphabetic signs (just give it a try in English), it performs more poorly on texts that are either very repetitive or of sign-sets with very skewed distribution (e.g. ideogrammatic or complex scripts). Though I'm afraid the method won't pass a bootstrap analysis, let's try it on a subset of Linear A texts: the Haghia Triada inscriptions! In roughly 2000 non-logogrammatic characters, it attests 77 of the 80-85 known phonetic Linear A signs. Mackay's formula would predict 80 characters. So it isn't that bad after all. We shouldn't forget though, that Linear A signs actually have a very skewed distribution towards zero frequency, so what Mackay's formula gives is an underestimation. Perhaps - if I'll have ample time in the future, I shall put some effort into developing a better mathematical model...

Because of such reasons we should not forget about those signs that are only attested in Linear B, without any known single Linear A precursor. Although some of these signs might be novel inventions, such as QO (*32) from Mycenean *qous = 'cow', PTE (*62) from Greek pteros = 'wing' (looks like the 'horns of consacration') or DWO (*90) from the numeral *dwo = '2'; the rest might be Minoan heritage. Some signs may have evolved to yield more than one offspring: a possible example is the Lin B *90 = DWO sign with its twin Lin B *83 (possibly ZI). A truely peculiar case is what we find at the Linear B signs WE and NO. There are signs that resemble them in Linear A, the problem is, they remain assigned to another group (the Lin B *75 = WE closely resembles certain occurrances of Lin A *53 = RI). Either some of these Linear A signs are mis-assigned, or we deal with a quite complex evolution. Especially problematic is the case of the Linear A 'I'-group. In this case, there are not only two but three linear B counterparts: I (*22), AI (*43) and NO (*52) ! This matter is so complicated I would like to deal with it in a separate post. But up to this date, the available evidence is still more suggestive of the main Linear A signs being correctly aligned, thus the ancestors of these Linear B signs being missing. A collection of these missing signs - along with those whose identification in Linear A is not universally accepted - I put on our last table:

Now, what was this fuss worth at all? With more-or-less precise numbers on our hands, we can immedietely go and check some theories about the phonetic system of Minoan language. For example, it was proposed by Beekes, that the language underlying the Minoan system should have had two additional series for most consonants: a palatalized and a labialized one. However, looking at the number (and the expected maximal number) of signs in Linear A, it quickly becomes clear that it is sheer impossibility to reconstruct a complete palatalized-labialized system. With 5 vowels, and 24 or more series of consonants, the quantity of signs would be far too high versus the attested sign-set, which is reasonably small (82 according to our tables). Even with the O-series discounted (4 vowels only), we would get a really bad overestimation.

In my opinion, the highest possible number of full consonantal series (based on 5 vowels) is about 18. The first table already featured 16 probably full or almost full series - if we add the less-well established DW- and SW- series, we are done. And there are no normal-palatalized-labialized triads, not even with T (or at least there cannot be a complete series). This estimation would give 90 signs as a theoretic maximum, and we were not far from that when counting all the 'uncertain' signs. Since certain syllables were likely very rare (as in any other language), I do not expect to ever see the full system. And - of course - we shouldn't forget about the presence of superfluous 'shorthand' signs: removal of these lower the number of possible regular signs even further!

Some other would-be decipherers of Linear A go with a different assumption: if the limited number of signs make their hypothesis impossible (as they assume too many consonants), they lower the number of vowels instead. While there do exist languages with just 3 vowels (Arabic comes to my mind), it requires painstaking 'reassignment' of a high number of signs, with an otherwise perfect reading in E or O. These "reconstructions" thus create much more problem than they solve. The only thing I could view as acceptable (though certainly not with my approval), is the removal of the O-series from the list. This series has the lowest number of confirmed signs; and some Linear A words even seem to testify an O - U ambiguity (e.g. compare A-MI-DA-U [ZA10] and A-MI-DA-O [PH31]). However, anyone who would have his hands itching to obliterate the O-column from the table with a single scratch should stop for a second. Because they really need to explain why the PO, TO and RO (=LO) signs borrowed into Cypro-Minoan (and ultimately Linear C) have exactly the same phonetic value as the Linear B ones!
Posted by Andras Zeke date: 11:21 AM