Pre-Greek place-names of the Aegean

In my next post, I shall briefly tackle an interesting and very popular approach to the research of ancient Aegean languages. It is all about the faint traces a language can leave after millenia of its disappearence: the toponyms or place-names. Thanks to the conservative nature of our species, while conquests, migrations or cultural assimilation may swap the ethnic composition of entire regions, names of towns, mountains or rivers often survive without any major change. For example, while the overwhelming majority of Turkey now speaks an altaic language, towns and villages of Anatolia preserve their names from the Byzantine era, some of them even have original Hittite names - only in a slightly changed form.

The fact that a large portion of toponyms in ancient Hellas were actually of non-Greek origin, has already drawn attention in the beginning of the 20 century. Professors Blegen and Hailey have published their milestone article in 1928, analysing a large number of ancient toponyms in and around Greece. They come to the conclusion that there is a surprising homogeneity among toponyms found in Greece and western Turkey, pointing to an unexpected lingustic union in these regions predating the "coming of Greeks". They have also found intriguing patterns in the way these names were formed. The most typical and common ones were place-names ending in either -nthos/-ntha or -(s)sos/-(s)sa. Other scholars later expanded their lists and confirmed their findings. What I shall do now is show a good collection of these toponyms on maps, to give you an approximate picture of their geographical distribution. It took me a good deal of time to comply. My main sources were Blegen & Hailey (JSTOR, 1928), the neat list of Best & de Vries & Brill (Book title: Thracians and Myceneans, 1989), the Barrington Atlas (published in 2000), and many other minor articles. I admit I may not be the best in calculating geographic coordinates: if you encounter any major error or can give me further examples I could put on my map, let me have them. I welcome any comments, as always. 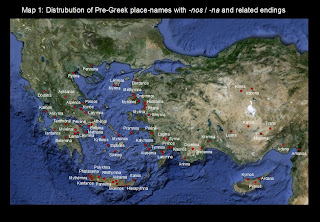 First of all, let us analyse the first class: Names ending in -nos/-na are among the most commonly seen in southern Hellas and western Asia Minor, also on the Cyclades and Crete. These are the most overlooked ones, too: Despite their "ordinary look", most of them do not possess any meaningful Greek (or even Indo-European) ethymology. On the other hand, they perfectly fit the pattern we would expect from adjectives in some ancient languages of Aegean origin. The suffix -na is well-attested in Etruscan, and also found in Eteocretan (Φραισονα = "Praisian", from the town of Praisos). Conforming this pattern, many names falling into this category have no vowels inserted between the stem and the *-na suffix. This is quite an un-Indo-European feature, yet perfectly explicable by a once-widespread "Aegean" presence in the area, from what Eteocretan, Eteocypriot, Lemnian and Etruscan are just meager, relictual remains. It should not be forgotten that there does exist a similar (perhaps very distantly related) Indo-European formative *-en-, but the IE languages tend to preserve that -e- vowel.

Toponyms ending in -nos/-na are widespread all around the Aegean, also found on Cyprus and even in Eastern Anatolia. Yet the latter ones are generally thought to be from Hurrian and Hattic but not Aegean origin. Originally, most of them did not end in -na. This is demonstratable in quite a few cases, e.g. Tyana comes from Tuwanuwa and Adana from Adaniya. On the other hand, there is a surprisingly high concentration of originally *-na-type names on Crete, some of them already mentioned in Linear B sources (e.g. Itanos as U-TA-NO). Thus there can be little doubt about the close relationship between the language of Minoan Crete and those "Aegean" languages once spoken in Mainland Greece and Western Anatolia - only evidenced by their toponyms. 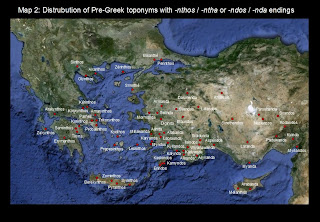 To the second major class of toponyms belong names ending in either -nthos/-ntha (Mainland Greece, Cyclades, Crete) or -ndos/-nda (Ionia, Lydia, Rhodes, Lycia). This type is slighly less common in Greece than the others, yet I managed to glean a sufficient number of examples to show that their geographical distribution is no different from the other "Pre-Greek" place-names. In Western Anatolia (especially in Lycia) on the other hand, they are the most typical toponyms. Apart from these main versions, there is also a variant in -nza/-nzos seen in Eastern Anatolia. Some Greek toponyms end in normal -s in their nominative case, only showing the -nth- stem in oblique cases (e.g. Tiryns [gen: Tirynthos]). Heteroclites were absolutely typical in Ancient Greek, adoption of this feature on non-Greek terms shows how perfectly these names were assimilated into early Greek.

When trying to interpret the meaning of this suffix, we encounter unexpected difficulties. Mycenean Greek had no such formative; and it was not used by Etruscan, either. But from the analysis of loan-words entering early Greek (e.g. Labyrinthos, etc), it is obvious that this suffix must have been existing, and still productive in Minoan. Fortunately it also existed in ancient Anatolian languages, like Hittite and Luwian, whence we can find out the exact meaning. Interestingly enough, Hittite presents us not only one, but two classes of such endings. One of them, the -wand- formative has a general possessive sense of meaning (e.g. esharwands = 'bloody' from eshar = 'blood'). This one is perfectly explainable from an IE *-went- suffix, sporadically also seen in Mycenean Greek (e.g. O-DA-TWE-TA = οδόνταϝέντα (odontawenta) = 'teethed'). The other ending is the fairly common -and- formative, carrying a 'collective' sense of meaning (e.g. udneyands = 'all lands' from udne = 'land'). It was also used as an "agentive", when forming subjects from neuter nouns. The same structure is also seen in the Luwian "collective plural": For example, the word dawi = 'eye' admits a normal plural dawa meaning 'eyes'. But when speaking about eyes of different individuals, the correct plural form is dawanda. Although some linguists seek to derive the latter formative with the Proto-IE *-ent- present participle, the collective meaning is hardly explainable. It is a more reasonable explanation that this is non-IE loan structure.

Conforming this duality, a high number of Greek toponyms actually has an ending in -u-, i.e. -ynthos. The rest most commonly ends with -i-, as -inthos. These would conform to the -wanda and -anda endings of Anatolian toponyms. What is strange, the -ynthos type toponyms are also found on places, where no early IE presence could be expected, such as Crete. And when we remove the -ynthos ending, we get stems practically meaningless in Greek. We are left with the conclusion that some ancient, supposedly non-IE languages used these formatives, and while the *-(i)ntha ending might be orginally Aegean, they might have borrowed the *-wuntha (-ynthos) version from some early Indo-European language, perhaps an Anatolian one. 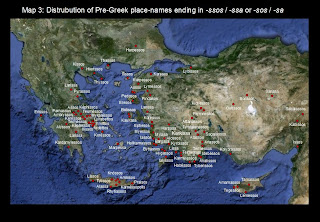 Last, but not least, there is the group of toponyms ending in either -ssos/-ssa or simply -sos/-sa. This is the most populous class by far. In a geographic sense, it also extends further than any other type. Many examples can be gleaned from outside the Aegean, such as Naissos (present day Niš, Serbia), Orgyssos (in Illyria) or Arabissos (in the Taurus mountains, eastern Turkey). One cannot exclude the possibility of either the Greek colonists spreading "usual" place-names of Hellas, or simple hellenization of local toponyms, no matter how meaningless these were for Greek speakers. Though the Thracian names in -dessa do not seem to belong here (I did not put them on the map either), we can also see variants in -ttos/-tta, conforming the Ionic Greek dialects.

Almost all the languages originating in the region have had a version of this formative: The -(i)śa suffix was used by Etruscans as a patronymic. In Anatolian languages, the related genitival adjectives were highly popular: the -assa type endings even superseded normal genitives in Luwian. We only have fragmentary evidence from Minoan, but it looks promising: Linear A names ending in I-ZA (*-itsa) likely belong to this class. According to some opinions, this suffix was not only used by substratum languages, but also had an effect on the development of Mycenean Greek: its endings were sometimes morphed into faintly similar structures, i.e. μελισσα (*melitia) = 'bee' from μελι = 'honey' or ϝανασσα (*wanaktia) = 'queen' from ϝαναξ = 'king'. Nevertheless, it is hard to track the origins of this suffix, because Proto-Indo-European also had a very similar form of singular genitive (variously reconstructed as *-(o)s, *-oso or *-osyo) and related adjectives. Only one thing is certain: these formatives almost invariantly express a possessive sense of meaning. The same should be expected from the cited toponyms.

Of course, some names can come in more than one version. Apart from spelling variants (i.e. Kérinthos [Boiotia] is almost certainly the same name as Korinthos [Isthmos]), there are some regular changes as well. Most common are pairs with and without a formative. Harald Haarmann gives a nice collection of them in his publication (2007): Alos (Thessaly) vs. Alinda (Caria), Bargos (Illyria) vs. Bargasa (Caria), Kyrba (Crete) vs. Kyrbasa (Caria), Leba (Macedonia) vs. Lebinthos (Caria), Oinoe (Attica) vs. Oenoanda (Lycia), Passa (Thrace) vs. Passanda (Caria), Prinos (Argolid) vs. Prinassos (Caria), Sardos (Illyria) vs. Sardessos (Troad) and Tegea (Arcadia) vs. Tegessos (Cyprus). Stems with more than one ending - though less common - also exist, e.g. Alyssos (Arcadia) vs. Aloanda (Lycia) or Parnes [gen:Parnethos] (Attica) vs. Parnassos (Boiotia).

A single place can also have more than one name: e.g. the Dirphys mountain in Euboia is also referred to as Dirphossos, and the township in Laconia by the name Kardamylessos is also called Kardamylé. In Hittite sources, some even more intriguing variations exist. The land of Caria is not only referred to as Karkiya, but also as Karkissa. One could argue that the different names were used by different languages spoken in the region, i.e. the Indo-European Hittites may have preferred the form Karkiya, while some indigenous Aegean tribes (the Karkas?) may have stuck with the form Karkissa. Such a "partial translation" of names can also explain the puzzling evolution of some toponyms. For example, it was always problematic for linguists to derive the Greek name of Troy, Ilion from the Hittite Wilusa. But the name Wilusa strongly looks Hattic: the -sa ending seems to be the same as that in Hattu-sa. If so, One could easily imagine a variant of the name in a more Indo-European form *Wiliya (that was not recorded in Hittite sources). From the latter, the Greek name Ilion would come simply and rather straightforwardly.

Lastly, it should be mentioned that some of these names (especially the longer ones) also enable us to reconstruct some more complex word-formations of Aegean tongues. For example, there is the group of names ending not just in *-na, but in *-sarna (Phalasarna, Alasarna, Halisarna, etc.). Since the stem *sar- has a meaning 'upwards', 'high', 'great', etc. in all Anatolian languages (also do not forget the Etruscan words śar = numeral '10' and srenc = 'mural' or the Philistine seren = 'prince') it is reasonable to translate these place-names as '-burg' or '-castle'. Just remember that the germanic word burg or borough (or Greek pyrgos) also comes from an IE stem (*bhregh-) meaning 'high'.
Posted by Andras Zeke date: 4:00 PM