In this post, I decided to go a bit off-topic. As spring is closing on and every little bulbous plant is beginning to grow in order to bloom, one cannot help but contemplate about the origins of these petty jewels of nature. Many of them stem from the ancient Mediterrranian lands; and if we traced their origins - or at least the origin of their names - we would be surpised to see most of them originating from Minoan Crete. For anyone wishing to read more on the Aegean origins of our common garden plants, I can recommend the works of C. Diapoulis or Katzler's spice pages.

Let us see a few examples of herbaceous plants bearing Minoan names! From monocots, there is the common daffodil (Narcissus sp.) called νάρκισσος in Greek, the Madonna lily (Lilium candidum), the Greek λείριον or the white asphodel (Asphodelus albus), called ασφόδελος by ancient Greeks. Many of these flowers were also associated with mythical figures and stories. (Need I tell the story of Narkissos or the connection of the asphodel flowers to Hades?) The names of these plants (and many others) are typically 'Pre-Greek', lacking any meaningful Indo-European etymology, yet sharing some common features. This is one of the hallmarks that these names borrowed by Greek are actually of Minoan origin. 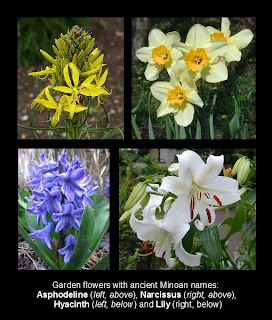 Althouth there are many more plants no longer bearing a Minoan name, we can be more-or-less certain that they were grown on ancient Crete, because of the frescoes. The paintings found on the wall of houses or the 'palatial' complexes depict a huge variety of plants: many of them still found in our gardens. Apart from lilies and daffodils we can find saffron (Crocus sativus), iris (Iris germanica) and gladiolus (Gladiolus segetum) flowers. There are wild rose-bushes (Rosa canina); myrtle (Myrtus communis) and sage (Phlomis fruticosa) shrubs; honeysucle (Loniceria etrusca) and ivy (Hedera helix) branches. Fruit-bearing trees were also depicted, like pomegrenates (Punica granatum). We also find palm-trees like the non-indigenous date palm (Phoenix dactylifera). There are also images of aquatic plants like papirus (Cyperus papyrus) and water lilies (Nymphaea alba). The frescoes even show weeds - common like today - such as nettle (Urtica pilurifera).

Perhaps the most beautiful and characteristic plant grown by ancient Cretans was the sea daffodil (Pancratium maritimum). It is depicted on a high number of frescoes as well as other objects. Faintly similar to the common daffodils but white in colour and blooming in summer, it must have had special importance to Minoans. Unfortunately sea daffodils are no longer cultivated today, but can still be encountered as a wild flower on the coast of the islands all around the Aegean Sea. The importance of this plant to Cretans is reflected by the fact that its symbol was even included in their writing system! One of the Cretan signs depict a lily-like flower: it is the Lin AB *27 (Hie *31) sign with a phonetic value 'RE' or 'LE'. On the hieroglyphic documents, this sign resembles not to the common lilies, but to Pancratium flowers, with their characteristic leaves and branched inflorescences. The Lilium flowers too, were an important symbol: another Minoan sign, Lin AB *122 (Hie *159), with the phonetic value 'RAI' or 'LAI', display a flower from the Lilium genus (despite its earlier interpretation as Crocus, It resembles more to Lilium, especially with its long stem and short bracts (barely visible on Crocus). 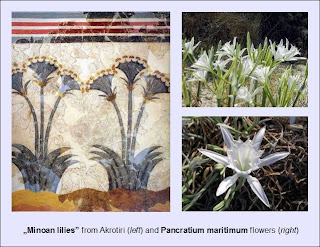 Other plants were not only planted for there mere beauty: Saffron or Crocus (Crocus sativus), was not only domesticated on the island of Crete, but also found application in numerous forms, most importantly as a dye and a spice. The Cretan origin of this plant is nowadays evident from genetic studies: it is a triploid and thus infertile variant of the wild-growing Crocus cartwrightianus plant native to Greece. Its Classic Greek name κρόκος, as well as its Semitic names (karkom, kurkum) likely come from the Minoan language. But we know that saffron likely bore a miriad of different names, like κνήκος (the term used for saffrons in Mycenean Greek) or others, lost to the passing of time.

We also know that the Minoans cultivated a high number of plants to use them as medicine, dyes, spices or just as food. Saffron was just one of them, with its stigmas used as a dye (not just for food colouring as today, but also for items like clothes). For example, wormwood (Artemisia absinthium) was used to ferment a strong alcoholic beverage that still keeps its name today: absinthe. Mint (Mentha sp.) on the other hand, was used for medicinal purposes. A special Cretan medicinal herb was dittany (Origanum dictamnus), that carries the name of mount Dikte and it is still grown on the island of Crete today. Poppy (Papaver somniferum) was likely domesticated in the western Mediterranean region, but was also cultivated on Minoan-era Crete, for medicinal purposes as well as its narcotic properties. Plants like caper (Capparis spinosa), celery (Apium graveolens) and garlic (Allium sativum) were used as spices. Linear B tablets also mention fennel (Foeniculum vulgare) and sage (Salvia officinalis) as MA-RA-TU-WO (classic Greek μάραθον) and PA-KO-WE (classic σφάκος). Other plants were imported from the East, together with their Semitic names: cumin (Cuminum cyminum) is featured as KU-MI-NO (κύμινον) and sesame (Sesamum indicum) as SA-SA-MA (classic σάσαμα) on Myceanean documents. Chick-pea (Cicer arietinum) was a legumine plant grown for consumption even in later times, but the Greeks still commemorated its Minoan origins by calling it ερέβινθος. 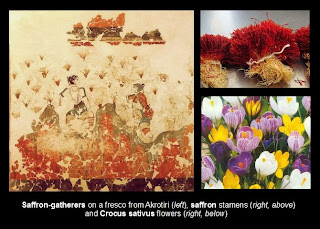 There is also an abundance of woody plants, trees and bushes that are planted since Minoan times and carry Minoan names up to the present time. For example, there is the Cypress-tree (Greek κυπάρισσος) that could be a symbol of Crete. Originally the name κυπάρισσος could denote any member of the genera Cupressus and Juniper. Although cedar-trees are famed for their timber since millenia in the ancient Near East, the tree received a new name in Greece, without any clear IE or Semitic etymology: κέδρος. The famous bay laurel (Laurus nobilis) was also called in a name predating the Greek civilization: δάφυη. Though almond-trees (Prunus dulcis) stem from the Middle East, they too, carry an ancient pre-Greek name up to this day: αμυγδαλιά. The olive trees (Olea europaea) yielded one of the most important products of the Aegean region: olive-oil. Domesticated in this region, the Greeks took its name - ὲλαία - from earlier inhabitants. As olive-oil is denoted by the syllable LAI (RA3) in Linear A, there can be no doubts that - this name as well - was of Minoan origin. Quince (Cydonia oblongata) stems from ancient Mesopotamia, but it likely grew so rich on Crete, that the Greeks and Romans called it "Kydonian apple" (κυδώνιον μῆλον) - where its modern name comes from. Perhaps one of the most common sight in today's gardens are the rose bushes. The name of rose (Rosa damascena) comes from the Greek ῥόδον. This is not a Semitic name, yet it does have cognates further to the east, like Arabic الورد (al-ward, hence the female name Warda) or the Hebrew ורד (wered). We also know that roses were one of the plants depicted on the beautiful Minoan frescoes found at Thera. Putting all pieces together it is quite possible that the name rose ultimately comes from an Aegean source. 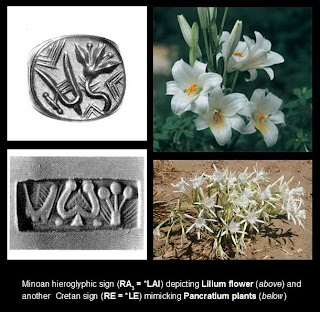 As for the terebinth tree (Pistacia terebinthus), we can be almost 100% sure that its name is of Minoan origin, because of its structure: places with -inthos/-intha and -issos/-issa endings are typically found on the western Aegean (that is, Minoan) linguistic territory. The eastern Aegean (proto-Tyrrhenian and Luwian) territories would instead preferably show (grecized) endings in -anthos/-antha or -assos/-assa. The terebinth or turpentine tree was not only used as a medicine, but also as perfume or incense. The temples and shrines of the Aegean region likely used excessive amounts of incense or scented oils made of terebinth: this is shown by the sheer amount - one ton - of resin found in the shipwreck of Uluburun, Turkey (dating to the 14th century BC).

The following table will summarise some of the more important plant-names that stem from an Aegean, most likely Cretan source:


The table is by no means complete and the reconstructions are far from certain. The original Minoan ending was almost always supplanted by a Greek nominative case-ending. In places where the original word likely ended in a vowel, I used 'a' , as this is by far the most common in Linear A words. Since the Mycenean age, Greek has had the tendency to recolour vowels inside stems from -a- to -e-, so it appeared wise to back-colour at least some of the stems to -a-. At some places, we have evidence of methathesis or other substantial changes: words attested in other languages like Arabic, Hebrew, Persian and Latin help to reconstruct the original sounding. Some of these names actually refer to similar, but not identical plants: the Latin ervum stands for bitter vetch (Vicia ervilia) and the Middle Persian aspand probably means syrian rue (Peganum harmala). I also made a good use of the "Pre-Greek" theory of Robert Stephen Paul Beekes. There are some reconstructed words that sound very similar to phrases recorded in Linear A. Most of them are personal names (like DA-KU-NA [HT103] and KU-RU-KU [HT87]) and not wares (like O-RA2-DI-NE [HT6] = resin?). Nevertheless, as it is common - even today - to give names of flowers, especially to girls, it is not beyond reasoning that these phrases are actually related to plant names.
Posted by Andras Zeke date: 1:40 PM